I've often wondered who the first people to surf in the Great Lakes region were. Bob "Aquadoc" Beaton, a long-time Grand Haven, Michigan surfer and historian, has been heard talking about a serviceman bringing a couple surfboards back from the Hawaiian islands after World War II, thus becoming the first "modern" (my quotes) surfer in Great Lakes surfing history.

As I have written before, the real growth didn't happen until at least the early 1960s when Gidget, the Beach Boys, and other pop icons of the time helped push surfing more mainstream; first, in California, but then along the rest of the west, east, and gulf coasts. And, into the Great Lakes region, where it has continued to slowly grow.

I put "modern" in quotes above because there may be more to the history of Great Lakes surfing. As far as I know, there is no hard evidence of native peoples of the region surfing on the waves of the five Great Lakes. The numerous Indian tribes of the region were eventually displaced by European settlers, then modern Americans. My opinion is that it is not only possible, but likely, that each of these groups "surfed" the waves of these gigantic lakes. There are those quotes again.

Surfing means many things to many people. If one's definition of surfing is standing on a surfboard and riding waves, the chances of early native peoples surfing here are probably much less likely. Although, you don't have to look far to find modern native peoples surfing by this definition, albeit on very crude equipment. If these kids in Papua New Guinea can ride waves on pieces of flat wood (alaias), it's not much of a stretch to think that Great Lakes natives were doing the same hundreds of years ago. 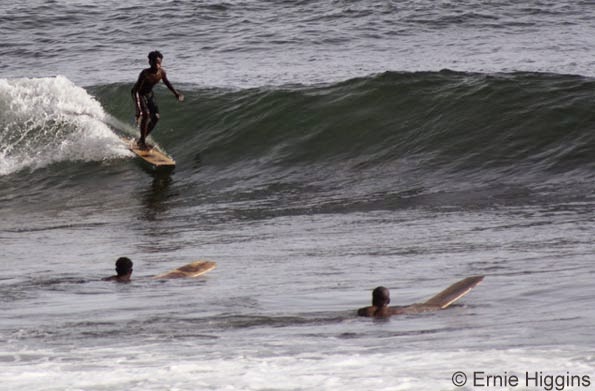 If your definition of surfing is broader - simply "riding waves", no matter how or what on - the chances of people surfing here in the 1500-1800s becomes much more possible. It could have been sliding in on pieces of wood, standing, kneeling, or lying. At the least, it's easy to imagine them paddling and surfing the waves in on their canoes. Here's an interesting article I found which imagines just that:

In the 1700's travelers might have found Algonquins pitching their bark lodges along the beach at Mackinac, spearing fish among the rapids of St. Mary’s River, or skimming the waves of Lake Superior in their canoes.

I remember Aquadoc sharing a few old photos - early 1900s - which showed someone at the beach holding what looked like a surfboard. Any evidence of surfing by the Great Lakes region's native peoples is surely long gone, but you never know. Regardless, it sure is fun to imagine local kids getting the same joy of riding fresh water waves to shore, 300 years ago, on the same beaches that we do today.